Sensors
GET A QUOTE!

We supply versatile potting compounds designed to protect sensitive electronics and PCB's from environmental and chemical stresses. Our selection of low-cost epoxy and polyurethane formulations is unmatched, giving OEMs the ability to spec the perfect potting resin for any application.

Epoxy and Polyurethane Encapsulants for Sensors

Epic Resins epoxy resin and polyurethane encapsulating compounds are designed to protect your sensors from both temperature fluctuations and environmental contaminants. Whether you are manufacturing an under-the-hood sensor for an automotive application or a sensor that must withstand a harsh chemical or physical environment, such as Tire Pressure Management Sensors (TPMS), Epic Resins will work with you to select or design a potting compound to meet your needs.

The chemists at Epic Resins will work with you to formulate the perfect encapsulation potting components for whatever OEM component you're manufacturing. We develop solutions for protecting sensitive sensors and transducers in measurement, control systems, and automation applications.

Epic Resins has decades of experience in specialty epoxy and polyurethane resins. Our staff uses superior customer service to work with clients to solidify their manufacturing production process. Our expertise provides clients the ability to maximize proactive product development and supply consistency to achieve maximum value.

Some Top-Quality Potting Compounds Available at Epic Resins Include:

Epic S7341 is a two-component epoxy potting and encapsulating compound designed with a low exotherm and a convenient 2:1 by volume mix ratio. Because of its high clarity, Epic S7341 is used in applications where items such as barcodes must be read through the potting compound.

Epic S7379A/B is a two-component epoxy potting compound designed to provide crack resistance in applications requiring harsh thermocycling of the encapsulated part. Epic S7379 displays good adhesion to most metal and plastic cases. With these two characteristics, Epic S7379 is an excellent choice for applications encountering problems due to moisture infiltration.

Epic R1016/H5008 is an impact resistant potting system that has been qualified per NAV AIR drawing 790AS743. The system has been approved especially effective for potting electronic components used in a variety of ballistic vehicles. Delicate components, e.g. glass diodes, should be coated with a resilient material such as silicone rubber to minimize stresses developed during curing. 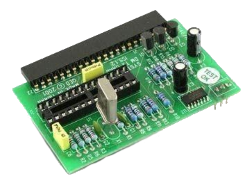 Automotive sensors are put through some extreme environmental stresses and require durable protective potting for the sensitive electrical components within sensor systems. Epic Resins' potting compounds and encapsulants provide the protective properties necessary for these essential automotive parts. We are also fully capable of adjusting product formulations to better meet the specific needs of whatever part you're building. Whatever your potting and encapsulation requirements, we'll work with you to get you the materials you need.

Get a Quote for Potting Compounds